By Laura Thalassa April 02, 2020
Ahhhhh!!! So freaking excited to share Famine's cover with you all! I'm O-B-S-E-S-S-E-D with it. 😍😍😍😍 A huge thank you goes to Regina Wamba of Mae I Design for the gorgeous cover and to @allenbokendall for modeling for it! 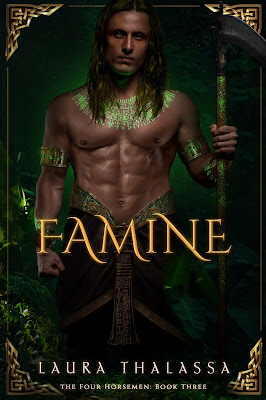 A lot of you have asked about when Famine was releasing. I'd been aiming for March, and that obviously didn't happen. I'm still in the middle of writing the book, and then there are edits, so it will probably be another couple of months--but it could be longer. At the moment I have both a toddler and an infant at home, so I'm back down to halftime work. That being said, I am LOVING writing this story and the characters. I can't WAIT to share more with you all. I'm sure I'll post another teaser in the next few weeks, but for now, here's the description:

Ana da Silva always assumed she’d die young, she just never expected it to be at the hands of Famine, the haunting immortal who once spared her life so many years ago. But if the horseman remembers her at all, he must not care, for when she comes face to face with him for the second time in her life, she’s stabbed and left for dead.

Only, she doesn’t quite die.

If there’s one thing Famine is good at, it’s cruelty. And how these blighted bastards deserve it. Try as he might, he can’t forget what they once did to him. But when Ana, a ghost from his past, corners him and promises pain for what he so recently did to her, she and her empty threats captivate him, and he decides to keep her around.

In spite of themselves, Ana and Famine are drawn to each other. But at the end of the day, the two are enemies. Nothing changes that. Not one kind act, not two. And definitely not a few steamy nights. But enemies or reluctant lovers, if they don’t stop themselves soon, heaven will.