The Audiobook for War is Now Out (Oh, and Some Other News too!)

By Laura Thalassa October 14, 2019
Hey there readers! So excited to give you all the updates! Since this is a long and rambling post (I figured it's nice to have one of those every once in awhile!), here's the Spark Notes version:

Now that you've all officially been warned, let's do this long-ass update!

Happy October! It's officially my favorite month because so many of my favorite people have birthdays this month, including my son, whom I just gave birth to at the beginning of the month! October also kicks off the holiday season, and then there's Halloween, my favorite holiday of the year (which is probably no surprise coming from an author who writes paranormal books!).

And with this time of year, I have all the updates. First, there's the audiobook for War (The Four Horsemen #2)!


The Audiobook for War (The Four Horsemen #2) is Now Out 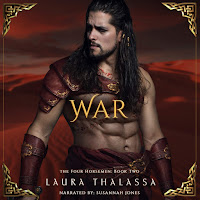 War on Amazon
War on Audible
War on Apple Books

The incredibly talented Susannah Jones, who narrated Pestilence and The Bargainer series, also narrates War, and as usual, she just brings the story and characters to life! I can't wait for you all to hear it!


Famine and Other Current Book Projects

For those of you who watch my writing progress bars (on the right side of my website), you'll see that I'm working on several projects at the moment, and--gasp--Famine is not the one in the lead! What fresh hell is this?! Hehe, the truth is, the months between the July release of War and my October due date was a weird time for me--too short to write a book, but too long to not write either. So I ended up using that time to write whatever I was inspired by at the moment.

Now that I've had my baby, I'll be focusing my attention on Famine. That being said, I'm one of those aggravating authors that let's the Muse lead the way. I write fairly slow, so if one idea is pouring out of me and another isn't, I'll go with the one that most demands my attention. It's this writing tactic that's responsible for Pestilence's existence in the first place, since that definitely wasn't the book I was supposed to write at the time!

As for the two secret projects I'm working on. I'm still not ready to reveal much about them, but let me just say I'm so freaking excited for them!

What is this, exactly? The ApollyCon Virtual Signing Bookstore is a bookstore hosted by ApollyCon, a book conference I will be signing at in March 2020 in Washington, D.C. If you can't make it but would like signed copies of any of my novels, you can head over to to this online bookstore and order the books of mine you want signed. Then, when I attend the conference in March of next year, I sign the books and they'll be shipped off to you.

***Be aware that if you order through this bookstore, you won't receive your books until March of next year.***

Folk of the Air Read Along 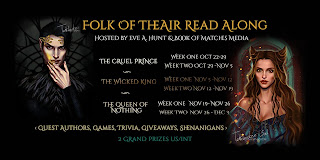 Last but not least, I'm so excited to announce that I'll be participating in a read along of Holly Black's Folk of the Air series (Cruel Prince, Wicked King, and Queen of Nothing) alongside several other awesome authors and artists. There will be author takeovers and giveaways (some of which are already happening now!). We have an event page on Facebook, and you can click here to join!

Phew! That's it as far as updates go! I can't wait to share more of my progress on my latest books. Until then--