I'm so, so, SO excited to finally share the cover for War (The Four Horsemen #2), along with the description and a teaser! I'm still working on the novel, and I hope to have it out by April/May! From the looks of it, it's going to be a loooooong book. I have my word count bar on the right measuring my progress, and I think it's going to be well over 100,000 words. (I don't know why I can't seem to write a short book these days!)

Alright, onto the really fun stuff!

Are you ready to meet War? Omg! I'm so giddy to share this one with you! Alright, here it is: 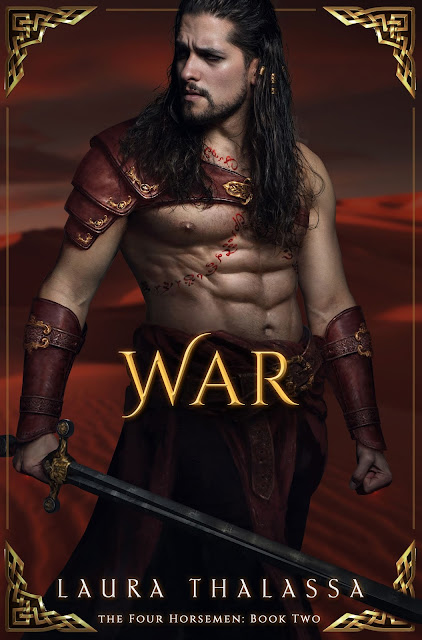 I am absolutely in love with it! The insanely talented Regina Wamba of Mae I Design designed it for me and she deserves all the props!

The day Jerusalem falls, Miriam Elmahdy knows her life is over. Houses are burning, the streets run red with blood, and a traitorous army is massacring every last resident. There is no surviving this, especially not once Miriam catches the eye of War himself. But when the massive and terrifying horseman corners Miriam, he calls her his wife, and instead of killing her, he takes her back to his camp.

Now Miriam faces a terrifying future, one where she watches her world burn town by town, and the one man responsible for it all is her seemingly indestructible “husband”. But there’s another side to him, one that’s gentle and loving and dead set on winning her over, and she might not be strong enough to resist.

However, if there’s one thing Miriam has learned, it’s that love and war cannot coexist. And so she must make the ultimate choice: surrender to War and watch humankind fall, or sacrifice everything and stop him.

I know it before I open my eyes—even before I fully shake off sleep. I’m far too warm, and I can feel his heavy limbs draped all over me as I lay on my side. Still, when I blink my eyes open, I’m not prepared for the reality of it.

My face is all but buried against his naked chest. This close to him, all I can see are the crimson glow of his markings and endless olive skin. How did this happen?

I glance down between us and—damnit, we’re on his pallet, not mine, which means I scooched over to him at some point in the night, sacrificing my blankets for his thin mat and thick muscles.

My eyes travel up, past the column of his throat, to what I can see of his face.

In sleep, War looks angelic—or, as I prefer, angelically demonic. All his sharp features have been softened. He almost looks … at peace. His jaw isn’t so firm, his lips seem more inviting, and now that I can’t see his dark eyes, he’s not nearly so intimidating.

I stare at him for a long time before I remember that I’m ogling a horseman of the apocalypse and I need to stop.

I also need to get out from under him, for that matter. War’s leg is thrown over mine, and his arm is draped over my side, hugging me to him.

With a little effort, I manage to slip one leg, then the other, out from under his own. When I get to his arm, I try to push it off of me—try being the operative word.

My God, his arm weighs five billion kilos, and it is not giving up its hold on me.

I twist a little with the effort. This ogre.

I take a steadying breath. This is really what I didn’t want. My eyes move to War’s. They’re open now, and so close I can see those flecks of gold in them. There’s a hint of a smile on his lips and a deep look of satisfaction.

He raises his eyebrows. “Is it?”

The horseman doesn’t bother pointing out that we’re on his flimsy excuse of a bed, but he also hasn’t removed his arm. Instead, his hand slides from my back to my ribcage, settling into the dip of my waist. I can tell he’s mapping out the contours of my body. He must like what he’s finding because he looks annoyingly pleased.

“Stay with me, Miriam,” he says. “Sleep in my tent. Make your weapons. Argue with me.”

I search his face. Now that he’s awake, he’s back to looking fierce. It makes it easier to say what I’m about to.

“No,” I say. “I’ll play along and let you call me your wife, but I’m never going to choose you of my own free will.”

War’s grip tightens against my waist. He pulls me in close. “Do you want to know a truth, Miriam? Humans make proclamations all the time. But their oaths are brittle and break with age. I’m not afraid of yours, but you should be afraid of mine for I will tell you this: you are my wife, you will surrender to me, and you will be mine in every sense of the word before I’ve destroyed the last of this world.”