So I've been getting oodles and oodles of messages, some excited, some panicked, some panic-excited about when Dark Harmony (The Bargainer #3) is set to release. I'm sure if you've been stalking this site or my social media you'll have noticed that there's no date.

No date? Ahhhhhhhhh! You vile wench! You're never ever ever going to finish this series are you?

To be serious for a moment, I'm getting the impression a lot of you are concerned for this book, which is fair because it's already been postponed six months--how much more waiting must I make you all endure?

Good news is that I'm working on it eight hours a day, five days a week, e'ery week. It's just that the more I write this book, the longer it becomes. (I don't think Callie and Des want me to end their story!) So I'd say I'm about two-thirds of the way through it, but I could be under-balling that estimate because re: long book. I'm still not giving Dark Harmony a release date (since I'm infamous for blowing past them), but I thought that maybe I could lighten that blow by sharing the cover and description! Weeee! And a teaser? Did I hear ... teaser?

For realsies, guys--gals--creatures of the deep, I don't want anyone to get scared that I'm going to shelve this one again or that it's all finished but I've cruelly decided to withhold it because muahahahaha, Imma evil author that delights in torturing you all! Dark Harmony is slowly but surely getting written and polished, and I will put it on sale/pre-order the instant I think it's ready!

Onwards to the extra good stuff! 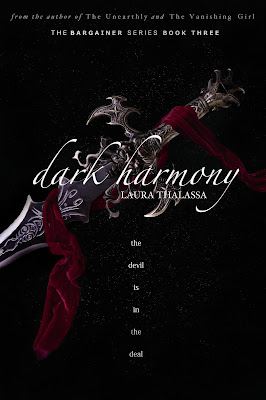 There are worse things than death. Things that lurk in the shadows and slip into your dreams. Things that have no business existing. Things that once slept … but have now awoken.
For Callypso Lillis, the fae magic that now runs through her veins is equal parts curse and good fortune. For the very thing that bonds her to Desmond Flynn, the King of the Night, also makes her vulnerable to the Thief of Souls, a man who wants to break the world … and Callie along with it.
But it’s not just the Thief whose shadow looms over the Otherworld. Des’s father is back from the dead, and he wants revenge on the son who sent him to the grave in the first place.
Des and Callie must figure out how to stop both men, and time is running out. Because there are forces at play working to tear the lovers apart once and for all … and unfortunately for them, death is no longer the worst thing to fear.

Teaser time! Please forgive any errors, this hasn't been edited so the final copy is bound to change! Hope you enjoy it anyway!


The seer reaches a hand out, presumably to shake Des’s. The Bargainer looks down at it with mild distaste.

Instead of taking his hand, a black business card manifests between Des’s fingers. “You know how this works. We’re not fucking chums. Give my card to a friend in a tight place, or don’t, but don’t forget where we stand. You still have a favor left.”

I guess that’s as close as the Bargainer ever gets to his nicer clients.

Collin takes the card from Des, and that should be the end of things. It’s not.

Maybe Collin is cocksure, or curious, or maybe he just wants to make a point, but at the last minute he grasps Des’s retreating hand, forcing the Bargainer into a handshake. The moment Collin’s skin comes in contact with my mate’s, the seer sucks in a breath, his eyes unfocusing.

Des’s form flickers; one second Collin has him by the hand, and in the next Des is grabbing him by the throat. He slams the seer back against the desk. “I’m sorry, but I don’t remember asking you to fucking read my future,” the Bargainer says calmly. There’s nothing to give away his simmering anger—no shadows, no outline of wings—nothing.

Collin pries at Des’s fingers uselessly, but the more their skin comes into contact, the worse off the seer appears to be. His eyes roll back, his breath coming in choked gasps. His body spasms once, twice.

I step forward. “Des, what are you doing?” I ask, alarmed.

He frowns down at the seer. “Nothing.” As if to prove his point, the Bargainer releases the man.
Collin crumples to the ground, his body weak and shaking. He moans, his eyelids fluttering. He coughs. “Bargainer—”

The Night King stares impassively at him. “You pull that stunt again, you’ll lose those fingers.” Des glances over at me. “Ready to go, cherub?”

Des places a hand on my back and leads me towards the door.

“There’s something you should know,” the seer says. “The darkness … the darkness will betray you.”