Pestilence (The Four Horsemen #1) is Available for Pre-order

Pestilence is the first book in a four book series. That being said, it is a self-contained story, meaning that while the overarching story line of the Four Horsemen will continue on in the subsequent three books, this is the only story featuring Pestilence and Sara Burns. I can't wait to share the novel with you, but until then, scroll down for the cover, description!

P.S. If you'd like to receive an email on the day Pestilence releases, you can sign up for my newsletter here. 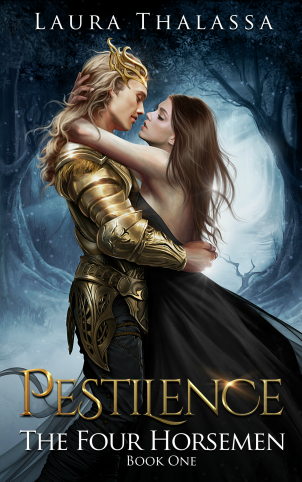 When Pestilence comes for Sara Burn’s town, one thing is certain: everyone she knows and loves is marked for death. Unless, of course, the angelic-looking horseman is stopped, which is exactly what Sara has in mind when she shoots the unholy beast off his steed.

Too bad no one told her Pestilence can’t be killed.

Now the horseman, very much alive and very pissed off, has taken her prisoner, and he’s eager to make her suffer. Only, the longer she’s with him, the more uncertain she is about his true feelings towards her … and hers towards him.

And now, well, Sara might still be able to save the world, but in order to do so, she'll have to sacrifice her heart in the process.
Coming Soon Enemies to Lovers Laura Thalassa NA Fantasy NA Post-Apocalyptic series Pestilence Post-Apocalyptic Romance Pre-order The Four Horsemen