I'm so excited to finally share with you all the cover and description for Pestilence (The Four Horsemen #1)! For those of you who haven't heard the story, this book idea, like many of mine, has been sitting on my computer for years. This past fall, while I was in the midst of writing Dark Harmony (The Bargainer #3), I was seized by the need to write Pestilence. Normally, I'm pretty good at ignoring Shiny New Idea Syndrome, but long story short, I didn't, and hence, Pestilence was born!

So, some things about the book. One, it's the first book in a four book series that focuses on the four horsemen of the apocalypse. Two, it's new adult post-apocalyptic/fantasy, which means you'll get a little magic, a little skin, and a world a little bit different from our own. Three, it's an enemies-to-lovers book. I sorta have a weakness for these. In fact, all four of the books will most likely be enemies-to-lovers. Four, it's coming this March. (Maybe February if I'm quick with the edits, but it's looking pretty solidly like a March release.) Five, and lastly (unless I remember something else), each book in this series will be self-contained. That means that each book will feature a different set of characters, and while the general story arc will continue on, this book will have it's own ending.

Oh, and by the way, for those of you Dark Harmony fans who are bummed about having to wait until summer to get the last book in the series, I *might* add the first few chapters of Dark Harmony at the end of Pestilence. I'm still wavering on this, mostly because I'm still on the first draft of Dark Harmony, and a lot about the book could change, but I'm thinking about it--I want to give you all something to hold you over for the next few months.

Alright, onto the cover and book description! Without further ado, here they are: 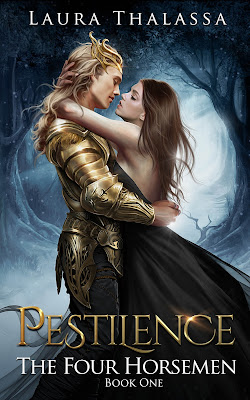 They came to earth—Pestilence, War, Famine, Death—four horsemen riding their screaming steeds, racing to the corners of the world. Four horsemen with the power to destroy all of humanity. They came to earth, and they came to end us all. When Pestilence comes for Sara Burn’s town, one thing is certain: everyone she knows and loves is marked for death. Unless, of course, the angelic-looking horseman is stopped, which is exactly what Sara has in mind when she shoots the unholy beast off his steed.Too bad no one told her Pestilence can’t be killed. Now the horseman, very much alive and very pissed off, has taken her prisoner, and he’s eager to make her suffer. Only, the longer she’s with him, the more uncertain she is about his true feelings towards her … and hers towards him. And now, well, Sara might still be able to save the world, but in order to do so, she'll have to sacrifice her heart in the process.