Cover Reveal and Description of The Emperor of Evening Stars (The Bargainer #2.5)

By Laura Thalassa July 28, 2017
Hey readers!I've been waiting forever to finally share news on the upcoming novella in my Bargainer series, The Emperor of Evening Stars (The Bargainer #2.5). For those of you who haven't heard, this is a novella entirely from Desmond Flynn's point of view. For those of you who don't know who Desmond Flynn is, he's the love interest in The Bargainer trilogy, my NA romantic fantasy series. If you're interested in checking it out, you can find the first book, Rhapsodic, here.The Emperor of Evening Stars spans Desmond's life, beginning with his childhood and leading up to the present day. I can't even tell you how excited I am to share those glimpses of Desmond's life that you haven't seen as well as several scenes you read from Callie's perspective. You might just enjoy how the fae king saw things ...For those of you who hate novellas (*raises hand*), this one should end up being roughly 45,000 words, which is approximately 200 or so pages. Whoop whoop! So it won't be painfully short. I'm giving it a tentative release date of October 15, though that could always change, especially now that I'm a new parent (PSA: I had a baby at the beginning of summer, for those of you who didn't know.) :) It's essentially all written, but edits can take a while, and I'm also working on other projects at the moment (hello Dark Harmony).I'll have the pre-order for The Emperor of Evening Stars up in another month or so. Until then, I hope you'll be satiated with the cover, description, and teaser I have. (Keep scrolling to see it all!)For those of you interested in the paperback and/or audiobook of A Strange Hymn (The Bargainer #2), it's all coming out in August. I'll send out another email when both release! Dark Harmony is slated to come out this winter (December/January)! I know I'm missing several questions you have all asked; I'm going to do a Facebook Live video in another week or so, so you can ask them there! 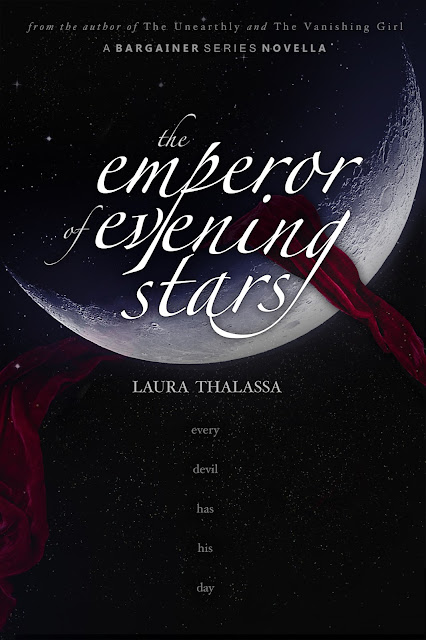 The Emperor of Evening Stars

In the beginning, there was darkness.
Before he met Callie, before he became the Bargainer, there was Desmond Flynn, the bastard son of a scribe. A boy born to a weak mother, cursed with little magic, and destined to marry a slave.
But fate had something else in mind.

Till darkness dies.
From the barren caves of Arestys to the palace of Somnia to the streets of earth, this is how Desmond Flynn, a fairy who began with nothing, became the Emperor of Evening Stars.

Teaser from The Emperor of Evening Stars
Here's a little teaser from the novella. The full scene was sent to my newsletter (which you can sign up for here):

I need her. On my throne and in my bed. Next to me always and forever. I need it more than air to breathe, and I’m going to have it.

The magic I’ve gathered throughout the evening now begins to release. It’s too ephemeral to be a spell, but it’s now in the air between us, luring her closer.

She glances at her bracelet. She must feel it.

This is what happens when darkness comes out to play.

She catches my hand as I stalk around her. “Des, what are you talking about?”

I hold our clasped hand up between us, my eyes moving from it to my siren’s face. A face born to make men die for. Dangerous, dangerous creature. I want her so badly I nearly shake from it.

Her deep, haunted eyes search mine. To take that wounded sheen away! I won’t rest until I’ve banished it from her features.

I smile at her. “How would you like to begin repayment tonight?”