I hope you all are enjoying A Strange Hymn, the second book in The Bargainer series! If you haven’t checked it out yet, you can click here to see the book on Amazon. For those of you unfamiliar with the series, the first book in the planned trilogy is Rhapsodic, and it stars Callypso “Callie” Lillis, a siren, and Desmond Flynn, better known as the Bargainer, a man Callie owes over three hundred favors to. Click here to view Rhapsodic on Amazon.

It’s been a long road for these two, and it’s not over yet. The third and final installment in the series, Dark Harmony, will be coming this winter. Until then, I thought I’d share some more info and some fun stuff on the series.

A Strange Hymn: Audiobook and Print Book
If you're interested in purchasing a print copy of A Strange Hymn, or if you like listening to the story via audiobook, you'll have to wait just a smidge longer. The audiobook is scheduled for release at the end of July. I unfortunately can't control this date as it has to do with my narrator's schedule and not my own. The print book should be available in another week or two.

Fun Extras
I have a couple of extra items that I meant to share with you all long before I released A Strange Hymn, but, well, obviously things didn’t quite go as planned. So without further ado, here are some of the fun extras to The Bargainer series!

The Kingdom of Night Map 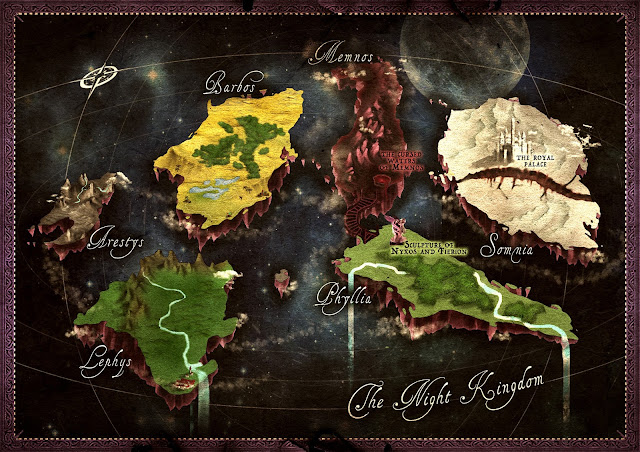 I don’t know how long or short this novella will end up being; I’m still putting it together as we speak, but it will be available this fall. (It’s a little something to hold you over until the final book in the series arrives.) I’ve already received the cover for it, and guys, it’s gorgeous! I’ll do a cover reveal in another month or two! Until then, I’ll simply reveal the title to you—The Emperor of Evening Stars. This will be book 2.5 in the series, so it’s meant to be read after A Strange Hymn. You can click here to add it on Goodreads.

I can’t wait to share more information with you about it and my other projects in the coming months!
Until then—