The Curse Catcher Novella is Now Out! 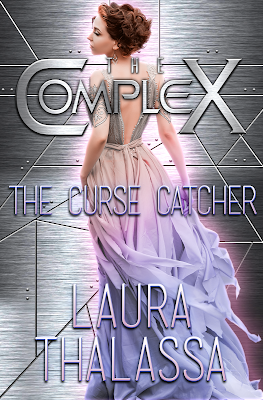 Welcome to the Complex, where peace is the goal, and chaos the reality. The Complex series is a group project I began with several other authors over a year ago. The idea of it was that we would all write sci-fi/fantasy novellas within the same world.

Fast forward to today, and I finally get to share with you my novella, The Curse Catcher! You can click here to check it out onAmazon, or read on for more information. And can we take a moment to drool over the cover, created by the wonderfully talented Rachel Mizer of Shoutlines Design? I'm in love with it!

The Curse Catcher is a 20,000 word novella (roughly 90 pages), and the premise of the story is that Skylar Curiel, the main character, is chosen as a sacrifice to be fed to a monster living under the Complex, a city where supernaturals, or Metas, and Humans are to coexist (much easier said than done). She’s thrown into this beast’s prison knowing she’s going to die. Only … things aren’t quite as they seem. And that’s all I’ll say on that.

One thing I want to point out is that even though this is a novella, the price is still $2.99. I’m not trying to swindle any readers out of money; this a group-set price, so I don’t have much control over the price point. I did want to point it out since I know for some readers this can be an issue, and I didn’t want to blindside you.

Below is a brief description of the book, and if you read on, you can learn a little more about the Complex series world.

An ancient beast’s cravings have awoken, and now they must be fed.

Locked away in a prison meant to hold an immortal, a creature’s inhuman screams pierce the air. It batters against the walls of its cage, denting them from the inside out.

Through an unlucky twist of fate, Skylar Curiel is chosen as a sacrifice to slake the creature’s enduring hunger. She knows nothing about what waits for her, save for one simple truth: death to all that pass into the beast’s lair. Only, she’s not planning on dying.

And the beast’s not planning on letting her go.

The World of the Complex
When a nuclear holocaust forces Humans to evacuate their home planet, they search the galaxies far and wide looking for a new planet to call their own. But they don’t find a single planet—they find seven.

In another region of the universe, Metas, a race of human-like beings with various supernatural abilities, are driven from their planet after a series of natural disasters decimate it. Three long centuries pass in deep space before Metas discover the Seldova solar system and the seven habitable planets within it. The only problem is that they’re already inhabited. By Humans.

With each species fearful of their own extinction, Humans and Metas wage a brutal battle for control of the planets. Over twelve long years the war is fought. Lives are lost and enemies become many. But in the end and against all odds, Humans and Metas come to an uneasy truce.

In the wake of their peace treaty, each species gains control of three separate planets. The seventh planet, Lorn, remains unclaimed by either Humans or Metas, and from it, the Complex is borne.

The Complex, a domed community, is created to pave the way for a more peaceful existence between the two races. Metas and Humans are sent there to coexist amongst one another. But living under a domed community can only mean one thing for the two species.