By Laura Thalassa December 16, 2016
After reading Rhapsodic (The Bargainer #1), my NA paranormal romance novel, many of you had questions concerning various details of the story. Below I've answered many of them. Reader beware, if you haven't yet read Rhapsodic and you intend to, there are many, many spoilers ahead, so read with caution.

Release date for A Strange Hymn (The Bargainer #2)
I’m not giving a specific release date for this book mainly because I have a bad habit of either (1) blowing past my deadlines, and/or (2) stressing out and being a pain in my friends’ and family’s ass trying to finish my novel in time. 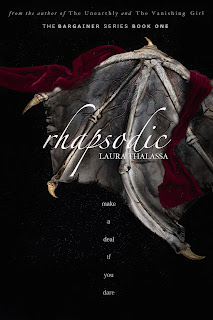 It takes me about three to four months to write a book, and I’m starting book two January of next year, so you can roughly expect the book to be out around mid-spring of 2017.

Where did you come up with the story line for Rhapsodic?
So, back in early 2014 I agreed to be part of what was to be the Moonlight Cravings Anthology. I was supposed to write a paranormal romance novella that had to have a tie in to the moon. At the time I was also working on The Unearthly series, which starred a siren and a vampire. I really wanted to write another siren story, but I didn’t want the love interest to be a vampire (which would have a nice tie in to the moon), so I settled on writing about a fae king of the night, and I built my story around him and the siren he fell in love with. Over the next days and weeks, I filled in the backstory with these two characters—that’s when I first decided that the two had this long and complicated backstory. That’s around the time I also decided that this fae king also “moonlighted” (heh heh) as The Bargainer, a criminal that would grant supernaturals favors for a price. I also decided at this time that Des was to have bat-like wings and that Callie would be dating a shifter when Des reappeared in her life.

Several months later, the anthology fell through, and I made plans to make this novella into a full-blown series. Only, I had to first finish writing The Cursed (The Unearthly #3). And then halfway into that project, this lightning bolt idea struck me, and I halted writing The Cursed to write the first draft of what would be The Queen of All that Dies … and then I signed a book deal with Skyscape and had to pound out The Decaying Empire, and then I had to write the fourth book in The Unearthly series … and on and on it went. And every so often in those two (now almost three) years, some new detail would strike me about Rhapsodic, and I’d add it to the outline, wondering when I’d ever write this poor book. And then, the summer of this year, I was finally, finally able to pick up the idea and finish it, once and for all.

What does Callie look like?
I left this purposefully vague because I think that most readers identify with characters that closely resemble themselves, and since we all look different, I thought I’d leave that to each reader’s imagination. I personally have always pictured Callie with inky black hair and dark eyes.

What type of supernatural is Temperance “Temper” Darling? Can you tell us more about her? At one point you hinted that she was strong enough to take out Des.
Yes, this question. This should be answered in the second book, A Strange Hymn. For now I’ll tell you that she is a really, really powerful and scary supernatural and that she has turned her back on her heritage … for now.

Why did Callie turn into that birdlike creature at the end of the book?
I’ve had a few readers ask me this, as well as whether this now makes her a fauna fae or somehow tied to the Fauna Kingdom. The simple answer to that is no this has absolutely nothing to do with the Fauna Kingdom and/or the fauna fae. Way back when the world was young, sirens had wings and scales. In the mythology, they were beautiful creatures that weren’t fully human—they either lingered in the sea and were women associated with water, or they were winged women who called out to men from cliffs. Somewhere throughout the eons, sirens lost their wings and their scales and all their other animalistic aspects.

When Karnon meets Callie, he immediately senses these latent physical attributes she inherited from her ancestors. When he calls on his magic to bring them out, all he’s doing is making Callie an even stronger siren. Why he’d do something like this … you’ll find out in the next book.

How old is Desmond Flynn?
This is another question I’ll answer in A Strange Hymn (The Bargainer #2). For now, I’ll let him keep this secret to himself. J

How does Callypso exist if Gabrielle was supposed to be the last siren? What’s the timeline here?
For those of you who’ve read my Unearthly series, which takes place in the same world as Rhapsodic, you’ll know that Gabrielle was known as the last siren. So how is it that both Callie and Gabrielle exist? Originally I planned on answering this question in Rhapsodic, but since I wanted The Bargainer series to be able to stand on its own, I decided to exclude mentioning Gabrielle from the text.

First things first—Callie’s timeline sandwiches Gabrielle’s. Callie went to Peel Academy years before Gabrielle, but her present day story takes place roughly a year after Gabrielle’s story concluded. So yes, both Callie and Gabrielle are living at the same time and both are sirens.

The world Callie lives in, however, does believe that Gabrielle is the last siren alive, even though Callie is also clearly alive. How did this happen? One need not look further than Desmond Flynn.

During the last seven years he made sure to expunge Callie’s name and what type of supernatural creature she was from all news sources, textbooks, history books—anything and everything that could draw attention to her. Remember how in one of the flashbacks, Callie glamoured Stan and forced a confession out of the man against his will? Des just about had an aneurism at the end of the flashback. What readers don’t know is that this was the precise moment Des decided to expunge as many traces of Callie’s existence—and specifically, the fact that she was a siren—as he could from the record in order to protect her from his numerous enemies. Des has continued to erase Callie’s name from any and all records all the way up to the day they reunited, when she found him in her bedroom. Why did he stop? Well, one, because he was distracted ;), and two, because by then he was busy making plans to protect Callie in different and more intimate ways.

By the way, the few times Callie has seen references to Gabrielle Fiori as the last of the sirens, she has been peeved, but since she’s also in the business of keeping secrets (and flying her and Temper’s not-always-so-legal PI business under the radar), she hasn’t tried to correct the error.

If Callie’s stepfather was a seer, why couldn’t he foresee his own death and thus prevent it?
Seers cannot foresee their own futures.

Why did Desmond’s magic make him wait seven years before he could reach Callie?
The time period (seven years) is arbitrary. It could’ve been six, it could’ve been eight. What matters is that this was the amount of time Des’s magic deemed appropriate to fulfill the wish.

Alright, that’s it for now. If more pertinent questions come up, I’ll make sure to add them! Until then—