The Queen of All that Lives: Answers and Extras

By Laura Thalassa May 25, 2016
I was going to make this a video, but uploading it takes forever and I didn't want readers to have to slog through the entire thing to get to info they wanted to know about.

Below I'm inserting a photo of the book to hide the spoilers that follow. If you're interested in reading The Queen of All that Lives, you can click on the image, or you can click here. 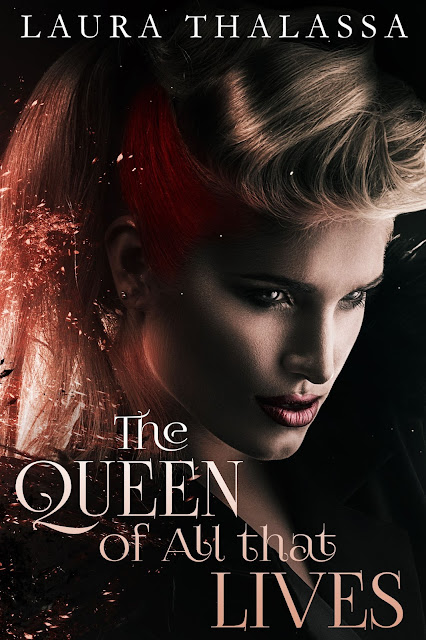 Alright, so if you've made it this far, let's begin!

The Double Agent Paradox
So, at the end of the book, you find out that Marco is a double agent. But if Marco is a double-agent, why is it that he didn't prevent all those times that his life and Serenity's and the king's were in danger when he supposedly could've?

The thing about Marco's relationship with the representatives is that it's unequal. Just like we saw with the reps and Serenity, they don't hold their allies on equal footing. The representatives don't tell Marco everything. The attack on the plane, for instance, was an off-the-cuff decision they made because Serenity was gaining too much ground with the people. They feed Marco enough information to keep him loyal, but he is by no means in their inner circle.

But most importantly, Marco has agreed to die for his cause. His cause, as the representatives understand it, is taking out the king and allowing the West to win the war. They expect him to lay down his life if that means killing Montes and Serenity without blowing his cover. So Marco has to juggle this with his allegiance to the king. And the king's end game is to kill all 13 representatives. Until that happens, Marco can't blow his cover as a mole and destroy the relationship with the West he spent decades building. Otherwise the plan he and Montes came up with--the one Montes tells Serenity about at the end of the book--would all be for nothing.

Montes's Changed Personality
I don't think there are too many questions concerning this, but I wanted to say anyway why I decided to make him the way he is. I think at our core, some things never change. A part of Montes will always be wicked. But, on the flipside, people do change. And Montes has had a long time to reflect on who he is, what he's done, and who he wants to be. Ultimately, he wanted to become someone he could admire, someone worthy of his wife's love.

Throughout the books, Serenity is plagued by this question: can wicked people be redeemed? And I wanted to answer it through Montes, who's one of the evilest people she knows. If he can redeem himself, then she can redeem herself.

Montes the All-Knowing
At the end of the book, Montes explains to Serenity that he planned everything. Does he actually know everything?

However, this is a man who has spent the last 100 years trying to (1) heal Serenity, (2) end the war, (3) cling to the wisdom and decency he's acquired over the decades. And Montes is a man who wants his cake and to eat it too. So he spent much of that time strategizing a way to get all of this, going through scenario after scenario of "what ifs". Even after all of that, he couldn't plan everything, which is why he and Serenity almost died several times.

To some degree, I did want him to seem omnipotent (even if he wasn't). I wanted to make sure that this unnatural--almost supernatural--aspect of his character that always spooked Serenity shined through all the way to the end of the series.

Alright, that's all I got for now, but if you have other questions, email me and I'll update this with your questions!