The Cut Final Scene from The Damned (The Unearthly #5)

By Laura Thalassa February 29, 2016
So long time ago I mentioned that there was a final scene in The Damned (The Unearthly #5) that I omitted in the published version. I did this for a lot of reasons, but the main one was that I wanted to close the storyline up tightly and leave it on a happy note.

This is not an extended ending, this is an alternate one, but it is spooky. So, you've been warned. Also, I don't feel it needs to be said, but I will anyway: don't read this if you haven't yet finished the series because there probably are spoilers ahead. I'm going to insert a lot of space between this paragraph and the start of the scene, so if you want to avoid reading it, you won't accidentally see something you shouldn't. :) 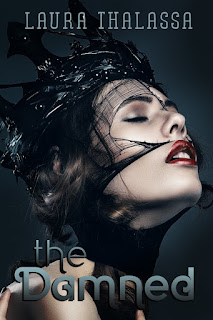 The Damned (The Unearthly #5) Final Scene

Much later, I lay sprawled on Andre’s chest, our legs intertwined. He adjusted us so that he could stare down at me. He touched my hair, then my cheek. A thumb brushed my lower lip.
“We did it, soulmate,” he said. “We survived the devil, a near-apocalypse, and—most insidious of all—a wedding.”
A surprised laugh slipped out at that.
Andre’s eyes fixated on my mouth, and then he leaned in, capturing my laughter between his lips. With a moan, I fell into the kiss, pulling his head closer to me. He rolled over me, one of his hands splayed at my waist. By the time our mouths parted, we were both breathing heavy.
He leaned his forehead against mine. “My wife is so distracting,” he said, a twinkle in his eye. “I was going to say that I think this moment deserves some celebratory champagne. Now however …” His fingers pressed in at my side.
I laughed and pushed against him. “Champagne was a good idea.”
“Now that I’ve been tormented by a siren, it doesn’t seem like it.” But as he spoke, he pushed himself away from me.
Andre got out of bed and ran a hand through his hair, casting one last longing glance at the bed. “I’m a damn fool,” he muttered.
“Hurry, the sooner you get the alch-y, the sooner you can get back in.”
He sighed. “I can deny you nothing.” Under his breath he murmured, “So whipped.”
I smiled as he left, but like him, I wasn’t super eager to part, even for a few moments. The day had kept us separated long enough.
Shortly after the door clicked shut, I rubbed my arms. I hadn’t realized how cold it had gotten. Then again, now that Andre was human(ish), he was like a living, breathing heater. I wouldn’t have noticed the temperature enfolded in his arms as I had been.
A chilly draft brushed through the room, making the flames of a hundred different candles flicker and shiver before resettling.
Phantom fingertips caressed my cheek. I sat up, goosebumps breaking out along my arms. I touched my cheek, then rubbed the sensation away.
Slipping out of bed, I slid on the revealing nightie someone had set out earlier for me. In Andre’s and my rush to get undressed, I hadn’t had time to put it on.
I stretched and headed to the bathroom to freshen up. When I returned, I stopped in my tracks.
At the foot of the bed, a rose waited for me, the tips of its petals smoldering. I waved my hand to dissipate the cloying floral scent and lifted the rose. Fingerprints singed the stem, and a small note dangled from it.
Not just a note, I realized as I lifted the flower up. A dainty chain had been wrapped around the stem. At the end of it a familiar locket swung like a pendulum.
My heart pounded between my ears. The obsidian rose embedded into its surface glinted in the dim candlelight.
I unwound the necklace from the stem and with trembling fingers opened it up. Immediately I snapped the locket shut, fisting my hand around it. I brought the hand to my lips, my brows knitted. The images were just as I remembered them.
My mouth had gone dry.
This could only be the work of one person, though person was perhaps the wrong word.
A god, a malevolent, twisted god. One who tricked me, captured me, and tried to enslave my soul to his. A god that redeemed himself somewhere along the way, but not before I betrayed him.
Against my better judgment, I read the rose’s attached note.

Your heart once belonged to me. I never gave it all back. Protect your soul, if you can. The moment it tarnishes, I will come for you. And this time, it will be for good.