By Laura Thalassa October 21, 2015
So I promised eons ago that I'd have more teasers up for The Damned (The Unearthly #5). This is the final book in The Unearthly series, and it hits shelves on November 15. I'll be putting one more teaser up here before The Damned's release, so make sure to keep an eye out for it in the coming weeks! Without further ado, here's the second teaser: 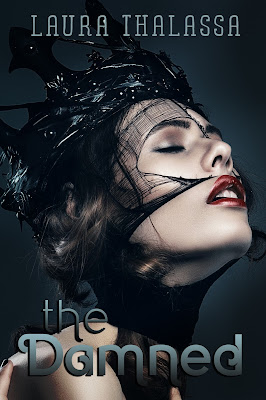 He smirked but said nothing. His shoes clicked against the stone floor. I’d come to hate the sound of them.

The walls here, also made out of the same dark stone as the rest of the castle were carved with faces of gargoyles and demons, and if I stared long enough, I could swear those faces moved.

We halted when we came to an elaborately carved door. Hades pushed it open and stepped aside so I could enter.

The room was hexagonal, just like the one I woke up in, and, like the rest of the palace I’d seen so far, it was decked out in black. On the far side of the room, the walls opened up to an opulent balcony. And in the center of the room was a canopy bed. Gauzy swaths of semi-transparent material hung from each post.

“Another torture chamber?” I asked.

He stepped in close behind me, his lips a breath away from me. “Not quite. This is one of our bedrooms.”

“What’ve you done?” I whispered.

He came around to face me. As he did so, our connection throbbed. The devil’s—shit, Hades—and mine. “Many things, little bird. Elucidate me on which you’re accusing me of.”

I edged away from him and clutched my heart, which thumped beneath my hand. I had no time to marvel over the fact that I once again had a heartbeat. “Why do I feel you here?” I asked.

He took another step forward. “You were made for me.”

“Do not speak the vampire’s name to me,” the devil hissed.

How could this happen? Making a deal with the devil, coming to hell, that was one thing. But to be bonded to this man, to have a part of me joined with him …

Sickness rose within me. My body had betrayed me in the most fundamental way.

He took my hand without asking and our surroundings disappeared, only to be replaced with those of a grand dining room.

Hades led me to an intricately wrought chair. I sat, thinking he would take his own seat, but instead he knelt in front of me.

“I will take care of you and cherish you the same way I do my power,” he said.

I searched his eyes. They were beautiful, just like the rest of his features. Beautiful, foreign and frightening.

“Why?” I asked. The devil wasn’t supposed to have a caring side. He was sadness and despair and loneliness and anger and violence and—

He sighed. “I can burn away a soul but apparently not your human misconceptions. You think I’m incapable of anything but hate and pain.”

“I am everything and nothing,” he continued. “Cultures have never agreed on a definition of me because I exceed language and logic. But, know this, Gabrielle: I am not the devil. Not with you.”

“Then what are you?”

Click here to add The Damned (The Unearthly #5) on Goodreads!