Reaping Angels Is Now Out!

Reaping Angels is now live, and you can find it here! I hope you enjoy X and Angel's story. It's the first time I've ever written a superhero story, and if you asked me two years ago if I'd ever write a story like this, I would've said, "Pssh, no way!" And here we are. Never say never, I guess!

So the nitty gritty: Angel's a superhero whose touch can heal. The Executioner--or X, for short--is a supervillain who kills with his touch. Their paths cross, he touches her, she doesn't die, he becomes a stage five clinger, and the rest you'll have to read! :) Here's the official blurb: 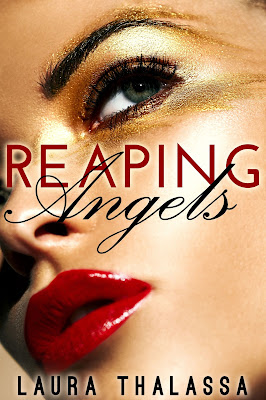 There are few things superhero Angel wants in life. World peace. Unlimited chocolate banana milkshakes. Spandex outfits with pockets. What she doesn’t want is the attention of the Executioner, a supervillain who kills with his touch. But the moment she survives a caress—and a kiss—at the mercy of his lethal skin, Angel realizes her problems just got a whole lot bigger. Because the only thing worse than a supervillain who wants to kill you is one who wants to keep you.

I had a blast writing this, and originally it was part of an anthology whose proceeds benefited the Wounded Warriors Project (so if you bought the anthology and read my story there, please save yourself the money of repurchasing it--the stories are the same). This is also a standalone--my first!--so I won't be leaving you hanging for months waiting on a sequel.

In other news, tomorrow marks the one month countdown until The Damned (The Unearthly #5) hits shelves! Keep your eyes open for teasers. (I have two coming your way in the next couple weeks!)