By Unknown August 01, 2013
I don’t know about a lot of you, but it’s difficult for me to pick out awesome books to read. Not that there aren’t oodles and oodles out there, but finding them can be a challenge. But when you finally come across a really fantastic book, the wait is totally worth it.

Today marks the release date of Broken Symmetry, Dan Rix’s new novel. Oh my heavens, this is one of those fantastic books! And I swear I say that as a reader and an editor, not as a significant other; this is a must-read.

Here’s the book’s description, and below that, my extremely professional (*cough*) review: 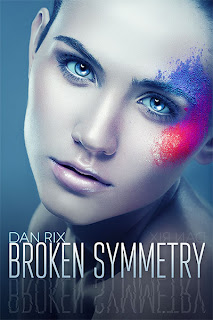 Eleven months after the father of sixteen-year-old Blaire Adams vanished without a trace, he's found wandering outside The Scripps Research Institute vomiting blood and speaking gibberish, his sole possession a worn leather diary filled with an unrecognizable language. He has a message for her.

As he dies in her arms, he claims he never vanished. She vanished.

In a nearby military quarantine zone, scientists are being called in from around the world to sequence a previously unknown strain of DNA. Scientists…and soldiers.

When her father’s autopsy reveals a rare chromosomal disorder—a disorder, it turns out, she inherited—Blaire begins to suspect her father’s last words weren’t induced by amnesia. Like her dad, she has an additional set of instructions in her genes—instructions for what, doctors can’t say. Only one thing is certain: it’s what killed him…and it will kill her too.

But now she’s haunted by prophetic nightmares of the Yellowjacket—a young murderer, eyes the black of charcoal, who lures his victims to suicide without ever paying them a visit. The only clue she has to his handiwork is a lingering feeling of déjà vu. That, and the nagging suspicion that all she knows is a mirage. She is certain of two things—though it may mean confiding in the wrong side of good and evil, he has the answers she needs.

And he is recruiting her.

I should start this by saying that, after finishing the book, it is easily one of the best books I've ever read. Ever. I know that's saying a lot, but you'll understand once you read the book.

So, here's what the description fails to cover that you should know:

1) Think Inception. The concept of "crossing over," or walking through mirrors, is just as spooky and well-fleshed out as the movie Inception. Not to mention just as good. In spite of that, this is not a copycat idea at all. But it will give you the same thrill all over again.

2) The science is solid. Dan Rix did his homework. Every strange occurrence has an explanation based on scientific facts. And, because of that, you're not going to see any illogical "rules" of this world. Thank goodness.

3) Blaire is an AWESOME main character. She's the type that gets herself into situations, doesn't take bull from anyone, and is absolutely hilarious while doing it all. She lightens up what could otherwise be a really dark book.

4) Damian. Hot. OMG, HOT. I'm fanning myself just thinking about him. And the chemistry between him and Blaire made me giddy throughout the entire book. But don't worry if you're not big on romance, Dan Rix makes it believable and just as edgy and thrilling as the plot itself.

5) The plot is ... unbelievably amazing. I'm not going to spoil the surprise, but I will say this: you won't be able to put the book down--and I mean that.