By Unknown August 18, 2013
Remember how I mentioned free stuff the other day? Well today I’m raffling off a Kindle copy of Dan Rix’s YA novel, Entanglement. This is an awesome, fast-paced read that will keep you on the edge of your seats, and look at that cover! Isn’t it gorgeous? Scroll down to enter the giveaway! 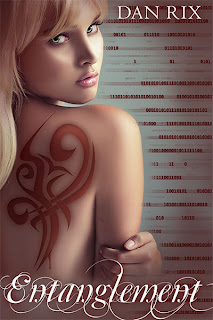 In a world like ours, humans are born in pairs. When a newborn boy takes his first breath in the coastal town of Tularosa, the exact time is noted, recorded in the Registry, and later compared to the birth times of other newborns around the globe. There will be one identical match—his half. They will meet on their eighteenth birthday and they will spend their lives together. Except this time, there is no match.

Hotheaded heartthrob Aaron Harper is scheduled to meet his half in twenty-nine days, and he doesn’t buy a word of that entanglement crap. So what if he and his half were born the same day and share a spooky psychic connection? Big deal. After breaking one too many teenage girls’ hearts, he’ll stick to brawling with the douchebag rugby players any day.


Until the day a new girl arrives at school and threatens everything he takes for granted.Cold and unapproachable, Amber Lilian hates the growing list of similarities between her and the one boy she can’t read, Aaron: born the same day, both stubborn, both terrified of meeting their halves. . . . All the more reason not to trust him. That she would rather die than surrender herself as her half’s property is none of his damn business. But once lost in Aaron’s dangerous, jet black eyes, she’s already surrendered more than she cares to admit.


Tangled in each other’s self-destructive lives, Aaron and Amber learn the secret behind their linked births and why they feel like halves—but unless they can prove it before they turn eighteen, Aaron faces a lifetime alone in a world where everyone else has a soulmate . . . and he’ll have to watch Amber give herself to a boy who intends to possess not only her body but also a chunk of her soul.